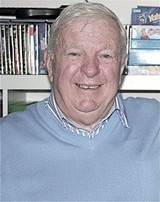 Born in Guildford and educated at Guilford Grammar School Peter had no interest in painting until 1995 when his wife bought a book on painting technique at the UWA book sale. Being a retired Bank Manager he didn’t like to see money wasted so decided to try his hand. He was immediately hooked.

He attended some group classes under the tutelage of Maurice Kennedy and Tony Letch and through Tony’s influence joined the WA Society of Arts in 1995. He entered a painting in their exhibition that year and was lucky enough to be awarded a Highly Commended and sold the painting to an American couple returning home.

This encouraged him to continue and since then he has consistently sold at both exhibitions and through private commissions. Though he has not won any major awards he has been awarded several Highly Commended, the most recent at the 2010 WASA exhibition.

Peter specialises mainly in landscapes, waterscapes and streetscapes though his commissions have included paintings of family farms at Kununoppin and Cardiff via Collie and the view from the 19th hole to the river for a member of Nedlands Golf Club. For variety he also completed a commission of her dog for the grieving owner. Recently he completed a set of three ocean yachting scenes for a Sydney Hobart racing enthusiast for his new home.

He is currently working on a 2.5 m x 1.5metre seascape of Eagle Bay commissioned for display in a new house in that area.

His works are represented in private collections in the UK, Germany, Holland, USA and Sydney.

Peter has been a committee member of the WA Society of Arts for 16 years and is currently President of the Society. He is also a member of The Watercolour Society of W.A. and is on their committee.